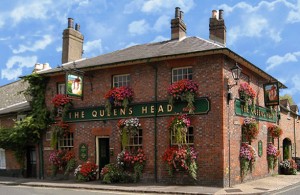 The pub first licensed in 1759 sits on the corner of Church Street and Wey Lane. An ancient watercourse passes alongside the pub, but these days as often as not there is little to be seen of it, unless the weather becomes very wet for a prolonged period.

This part of Chesham remains largely unspoilt, consisting of many narrow winding streets of old terraced cottages and the Queen’s Head is now the last surviving pub here.

A genuine English town pub, the Queen’s Head has retained most of its traditional features and is extremely popular with local people. Fullers have avoided the temptation of other chains to modernise the business into one of those awful ‘theme pubs’ and it has clearly been a very wise decision.

There are a wide variety of beverages available, but the ales and whiskies deserve a special mention. The collection of malt whiskies is superb, with a number of rare varieties seldom seen together in any pub or restaurant. The real ales however are for many the greatest attraction and are kept in perfect condition.

It was often said that a pub beside water “would always have a cool cellar and the best tasting beer”, after sampling the beers here, few would argue with that.

Food is provided in both the bars and the pubs restaurant across a small courtyard. There is a variety of traditional English pub food available, though the speciality of the house is clearly it’s Thai food. A Thai bar meal costs about £8 and is excellent value, it is also delivered to your table in no time at all by courteous staff.

A quick chat with the locals confirmed “The Queen’s” as being the best of the towns pubs by far and the whole experience was a delight.